Lou Mac
Newcastle upon Tyne, Northumberland, United Kingdom
This is a blog I use to share my papercraft projects. I make them for friends and family, as well as selling them to fund my craft stash. You can get in touch with me at loumac03@gmail.com if you have any questions or would like to place a commissioned order. 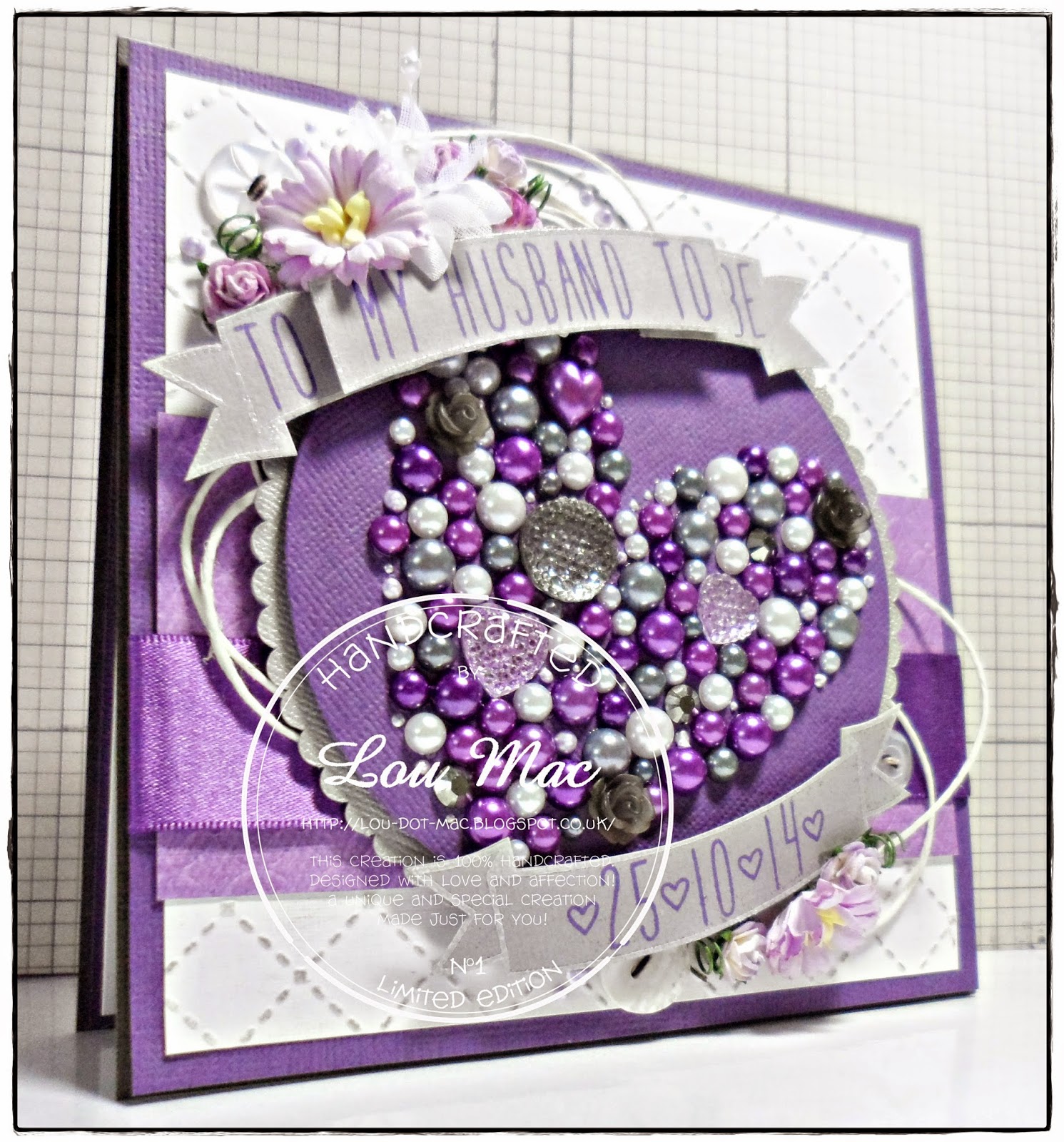 I used the adorable Cuthbert Cupid from Pollycraft. Had to. Look at him! Adorable!! I coloured him up using ProMarkers to match papers from Echo Park which I seem to have a total obsession with lately. I love the colour of his t-shirt. Anywho. 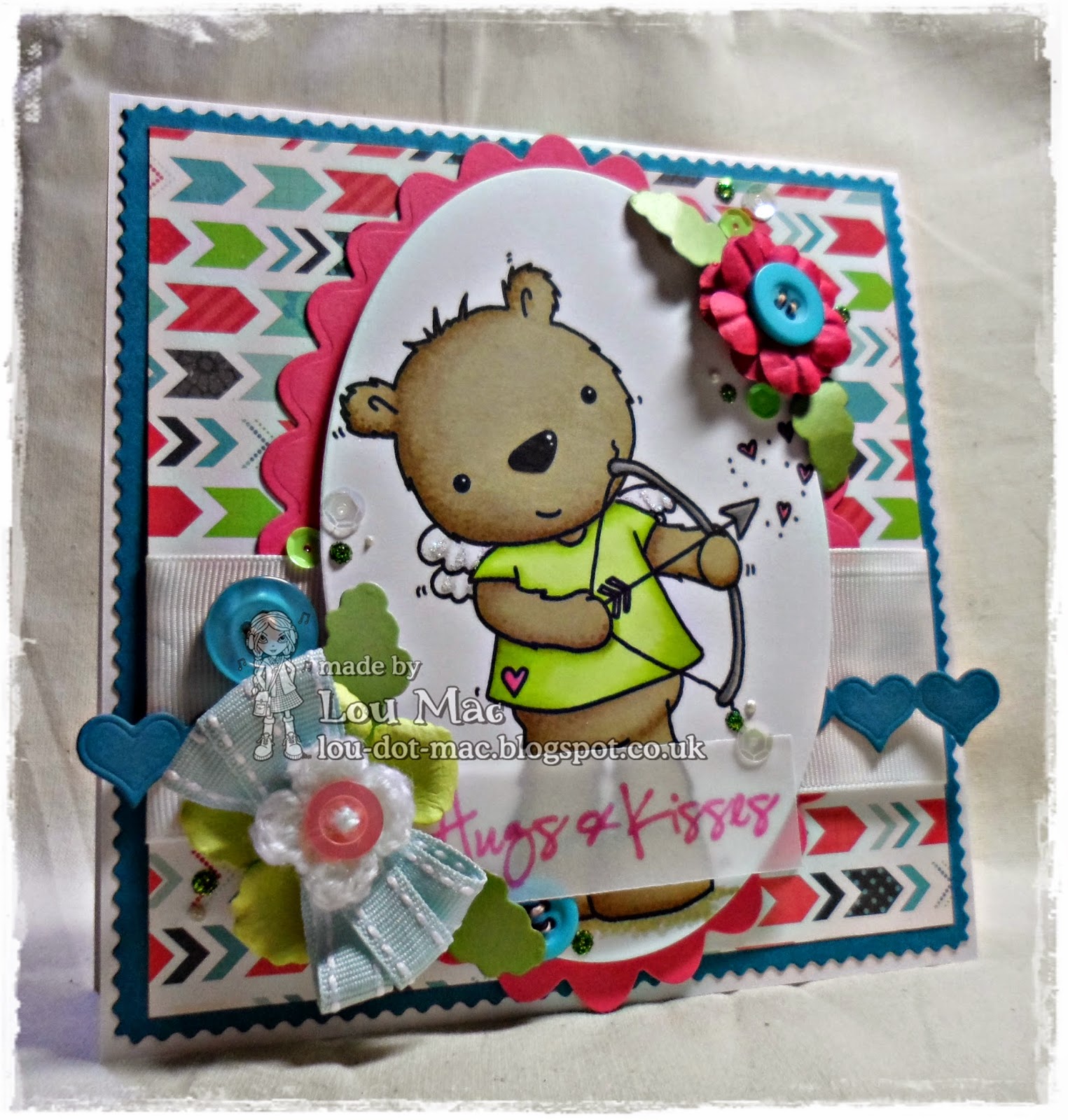 Yip. Echo Park paper, a whole load of Stampin' Up cardstock, Memory Box and MFT dies, paper flowers, sequins. All of that yummy goodness. I even used up a little crochet flower that I've been hoarding forever! ;) 2015 is the year to use up stash!

I hope you find the time to pop over to Little Miss Muffet Stamps and join in with our last challenge of January 2015! xx
2 comments:
Email ThisBlogThis!Share to TwitterShare to FacebookShare to Pinterest

I'm checking in with you this morning with some My Mum's Craft Shop inspiration. Using a bunch of Lawn Fawn goodies - which Kitty will have back in stock ASAP! You don't wanna miss out. Keep your eyes peeled for our newsletter dropping into your inbox. 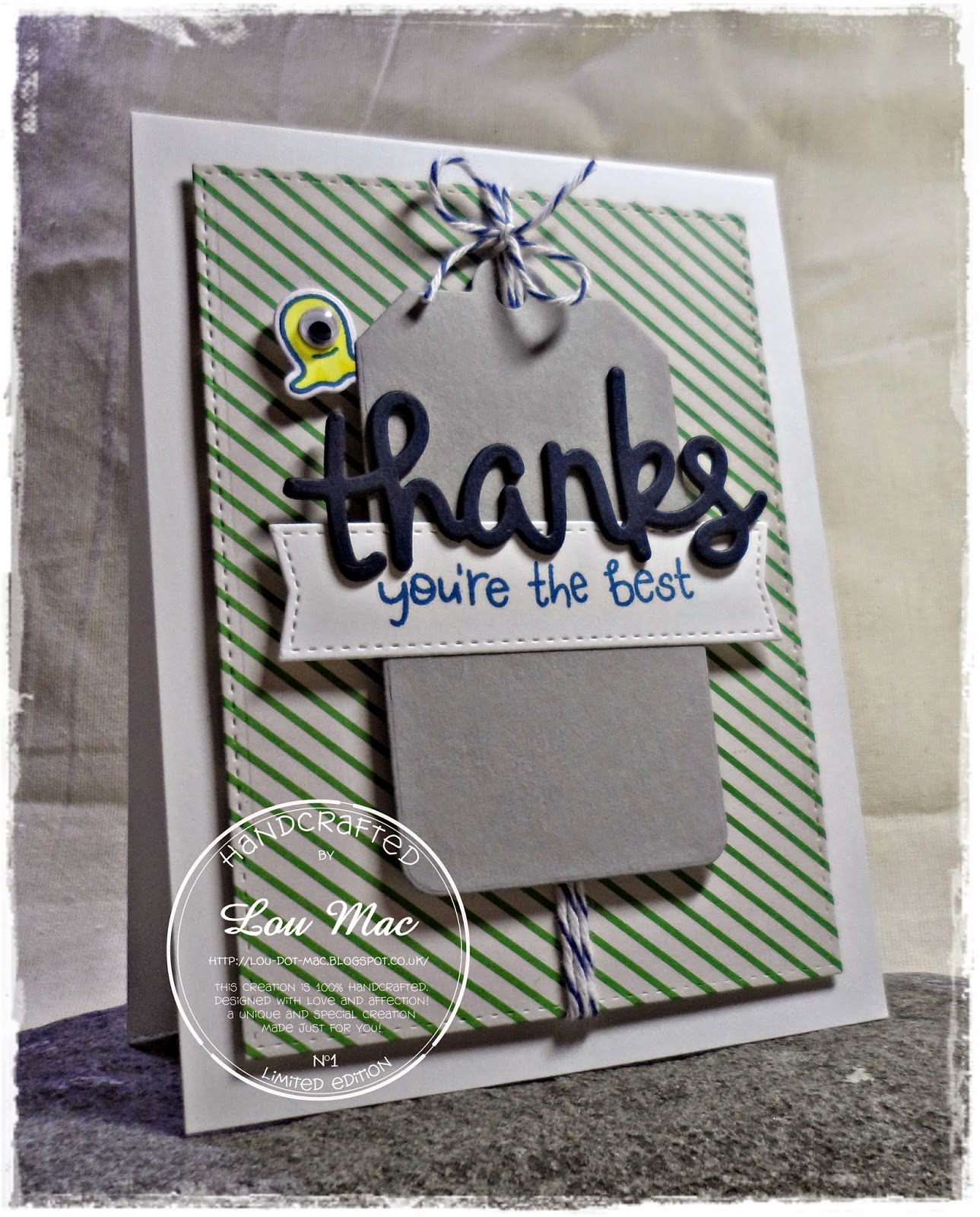 I used the THANKS DIE from Lawn Fawn to create my own chipboard word. I die cut the thanks with some navy blue cardstock 4-5 times and layered them up.

I then stamped a sentiment from Thank You Tags before cutting it with a die from Blueprints 20 from MFT and layering it over a tag cut using another Lawn Fawn die.

As a little whimsy, I stamped coloured and die cut a little critter from Monster Mash stamp set and matching die and tucked it behind the tag.

That's about it. Oh, and my papers are old My Minds Eye!

You are so nice.

Posted by Lou Mac at 08:00 Labels: Die-cutting, Digi, Echo Park, LMMS, ProMarkers/ FlexMarkers
Morning guys! I'm back on track (blog wise *I think*) and I'm back with the next instalment of Little Miss Muffet Stamps goodness!

This time round I used the gorgeous Sugar 'n Spice Doll Sassafras. I love everything about this little girl. She's adorable, don't ya think? I coloured her with ProMarkers and FlexMarkers. 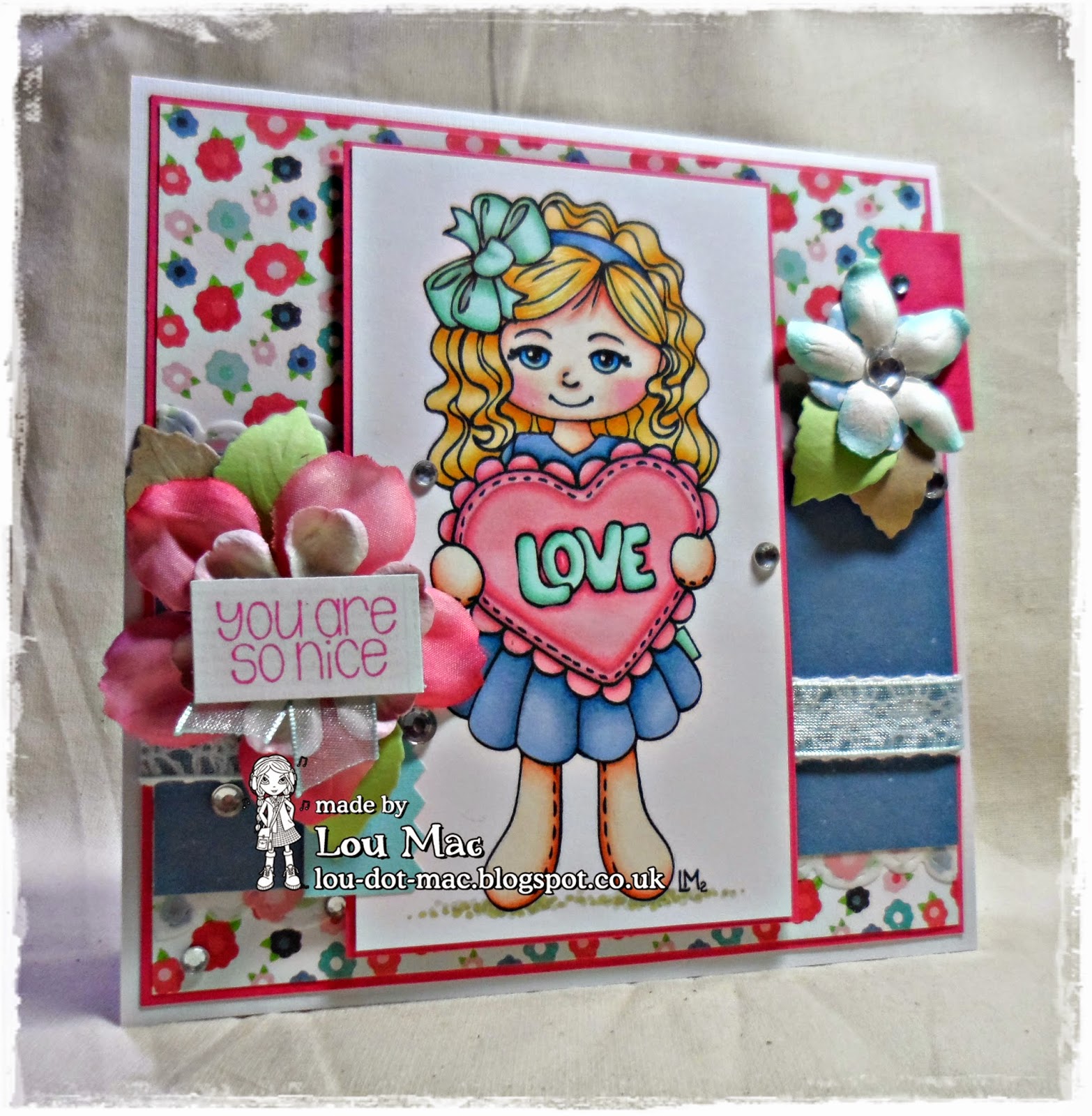 I coloured her up to match my papers from Echo Park. I paired her up with an Amy R sentiment stamped in Memento Rose Bud ink. I also added a bunch of paper flowers and leaves before adhering everything together and adding some clear rhinestones to finish it up.

Thank you for stopping by today! xx

Posted by Lou Mac at 12:00 Labels: Bo Bunny, Commissioned, Die-cutting, Embossing, Lawn Fawn, Paper Smooches, Papertrey Ink, Stamping, Wedding
Yet another card, from way back last year. That I failed to share with you guys. Nightmare. 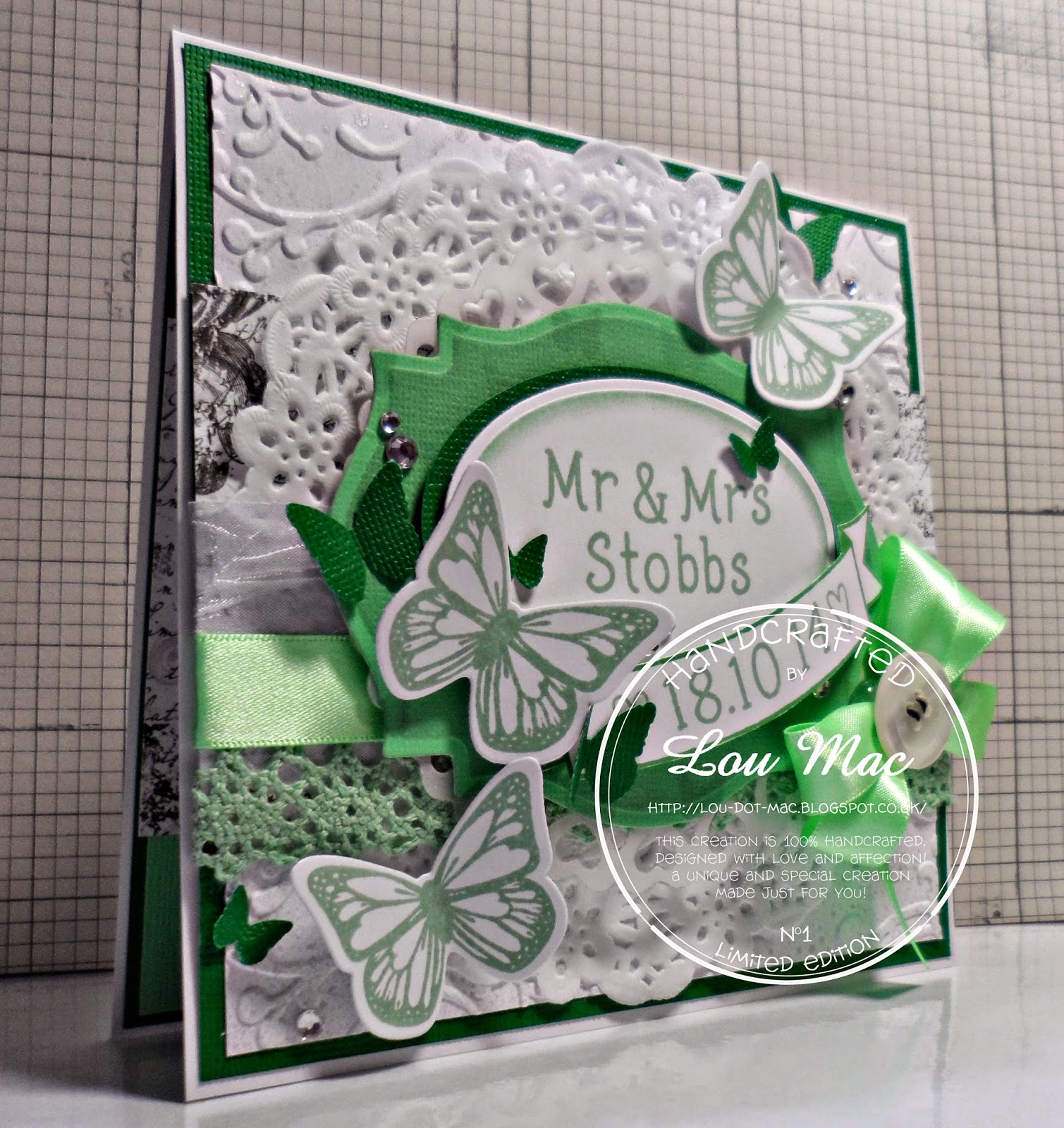 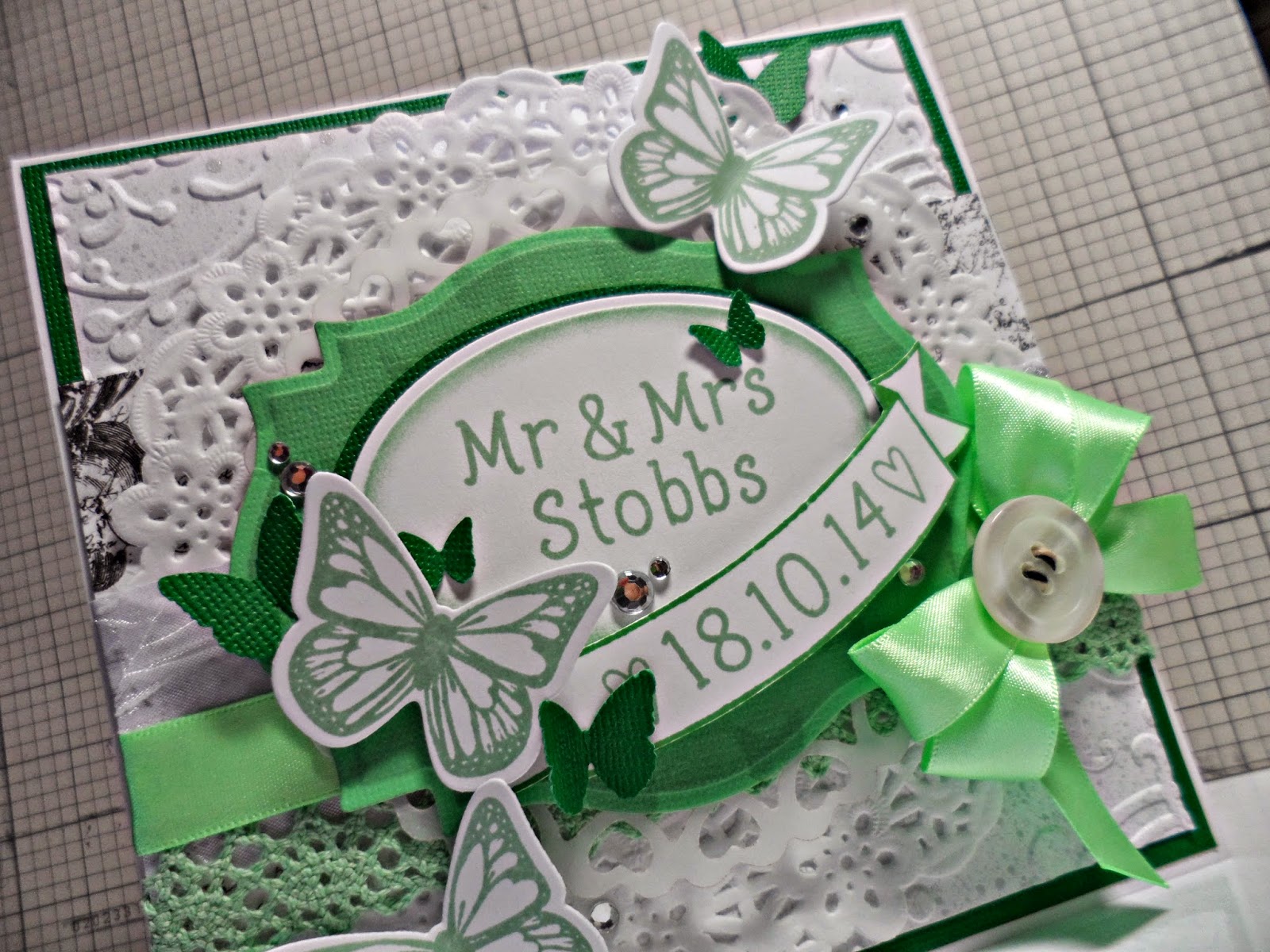 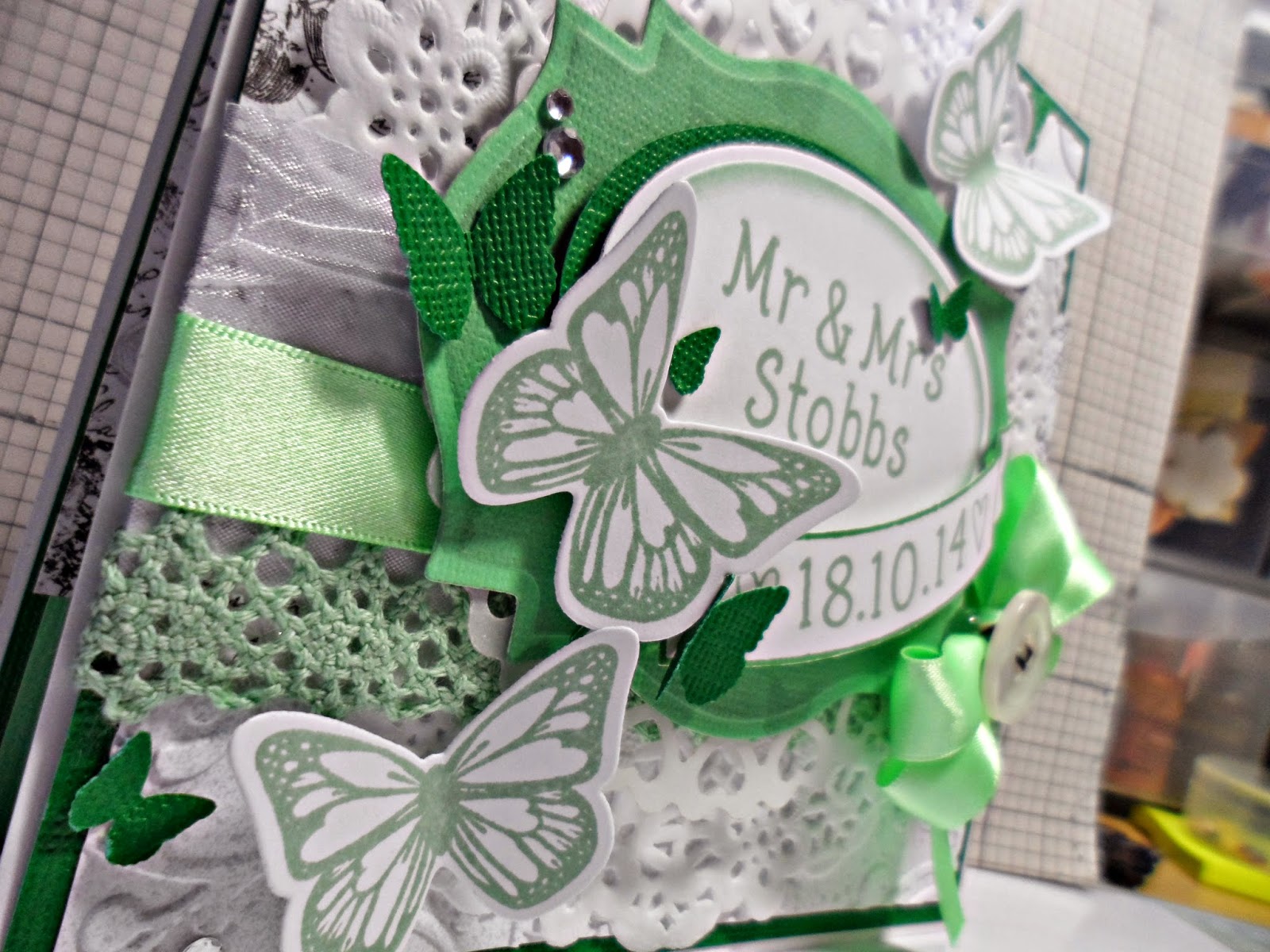 I tried to match the invite up as closely to the invitation as I could - I thought it'd be a nice touch.

I love the minty green colour. I think I used up the last of that ribbon on this card - but it was so worth it! :) xx

No comments:
Email ThisBlogThis!Share to TwitterShare to FacebookShare to Pinterest

It's time for a new challenge over at Passion for ProMarkers.

This week it's my turn to set the challenge theme, and I wanna see..

This could be anything from a new baby, a new home, a new job or perhaps tying the knot. 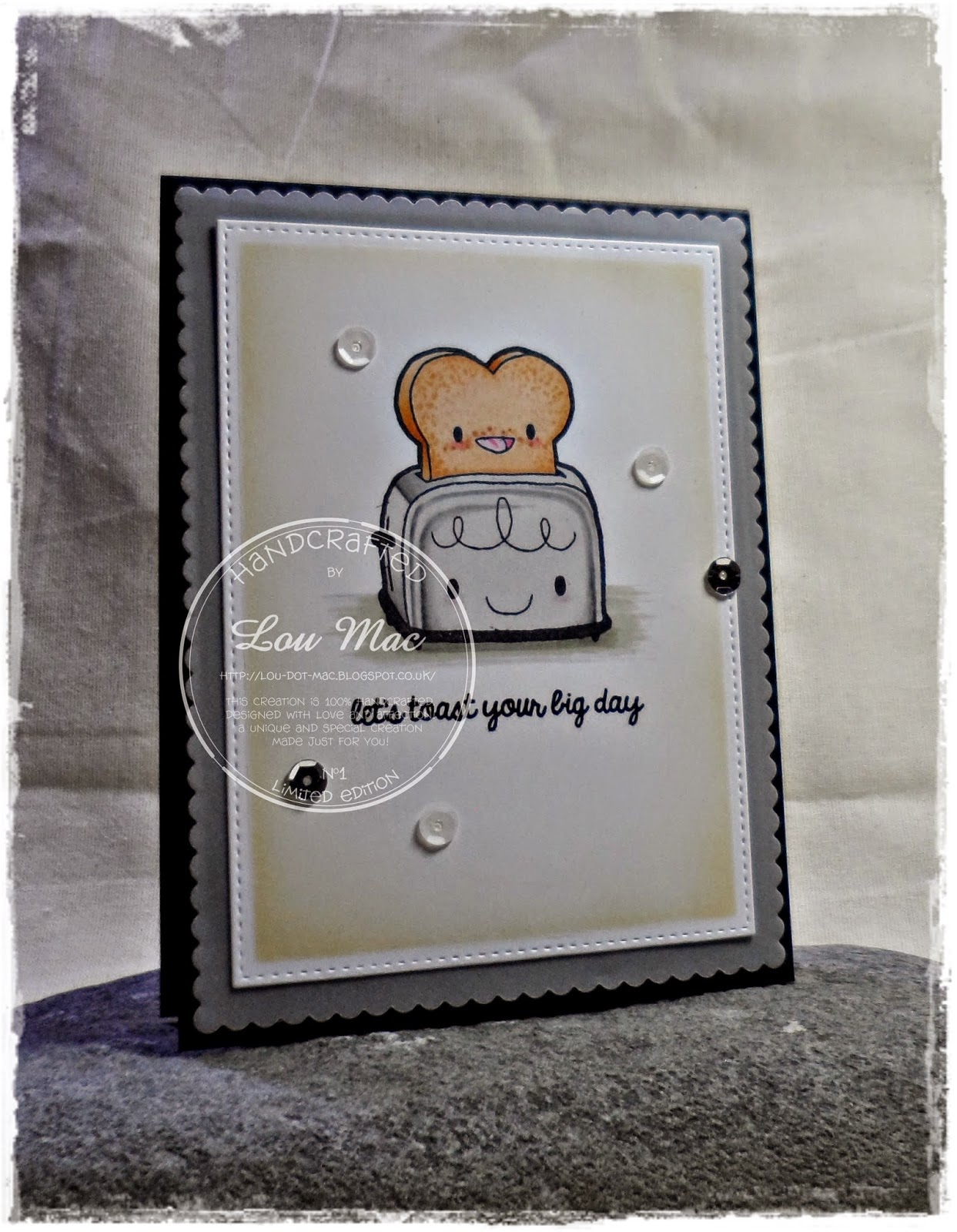 I have had this set from Some Odd Girl for some time now. The amazing Faye kindly mailed them over to me and had since been sitting in my *to use* pile, patiently waiting.

I adored making this card. Quick, punny and easy to put together. In fact, I'd go as far to say I love this set. Why have I left it hanging around, unloved, for so long?! The perfect wedding card for close friends, I reckon. I know my friends would appreciate something *different* like this.

That's my inspiraton for ya today. I do hope you find time to join in with this challenge.
Head over to Passion for ProMarkers for more inspiration and to leave your link so we can have a snoop around at your entry and your blog! Hugs. xo
1 comment:
Email ThisBlogThis!Share to TwitterShare to FacebookShare to Pinterest

Posted by Lou Mac at 11:00 Labels: Alpha Stamps, Commissioned, Doodlebug, ProMarkers/ FlexMarkers, Stamping, Sugar Nellie
*waves* I can't believe I didn't share this card with you guys waaay back at the beginning of November. I am terrible, I know!!

I made this card for a girl who is a lover of many things. Many things of which I tried to squeeze onto the card without it looking ridiculous.

Fairies, stars, toadstools, butterflies and flowers! Naturally, like most 11 year old girls she's a huge lover of pink, so I went really pink with some hot pink ribbon and flowers. Hopefully by age 24 she'll have grown out of it slightly! ;) It's not one of my favourite, in case you guys didn't already know. 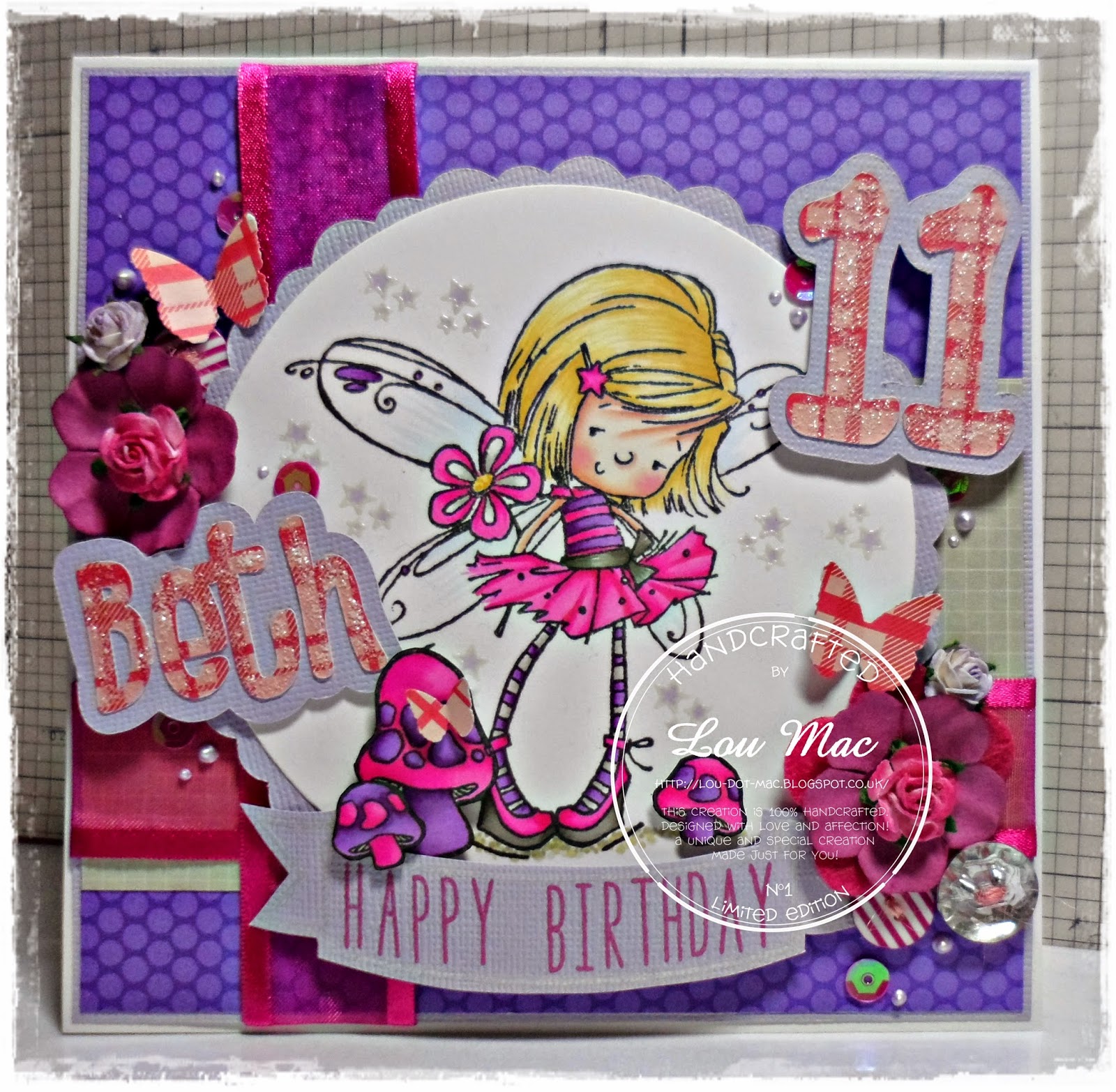 I used the adorable Charlotte from Funky Kits. Grab her while you can as she's retiring soon. I also used some toadstool stamps from Some Odd Girl which I always have a blast colouring up as well as a Martha Stewart butterfly punch.

I used my Cameo to create her name and age before stamping a Paper Smooches banner with Lawn Fawn alpha stamps to create happy birthday and added it all the card.

As finishing touches I chose some flat and 3D paper flowers, some glittery buttons and a whole load of liquid pearls and sequins. Job. Done. xx

Posted by Lou Mac at 09:00 Labels: Christmas 2014, Embossing, LMMS, Pollycraft, ProMarkers/ FlexMarkers
I know it's no longer Christmas, but I had to share this guy with you all!!

Is he not the cutest little penguin? 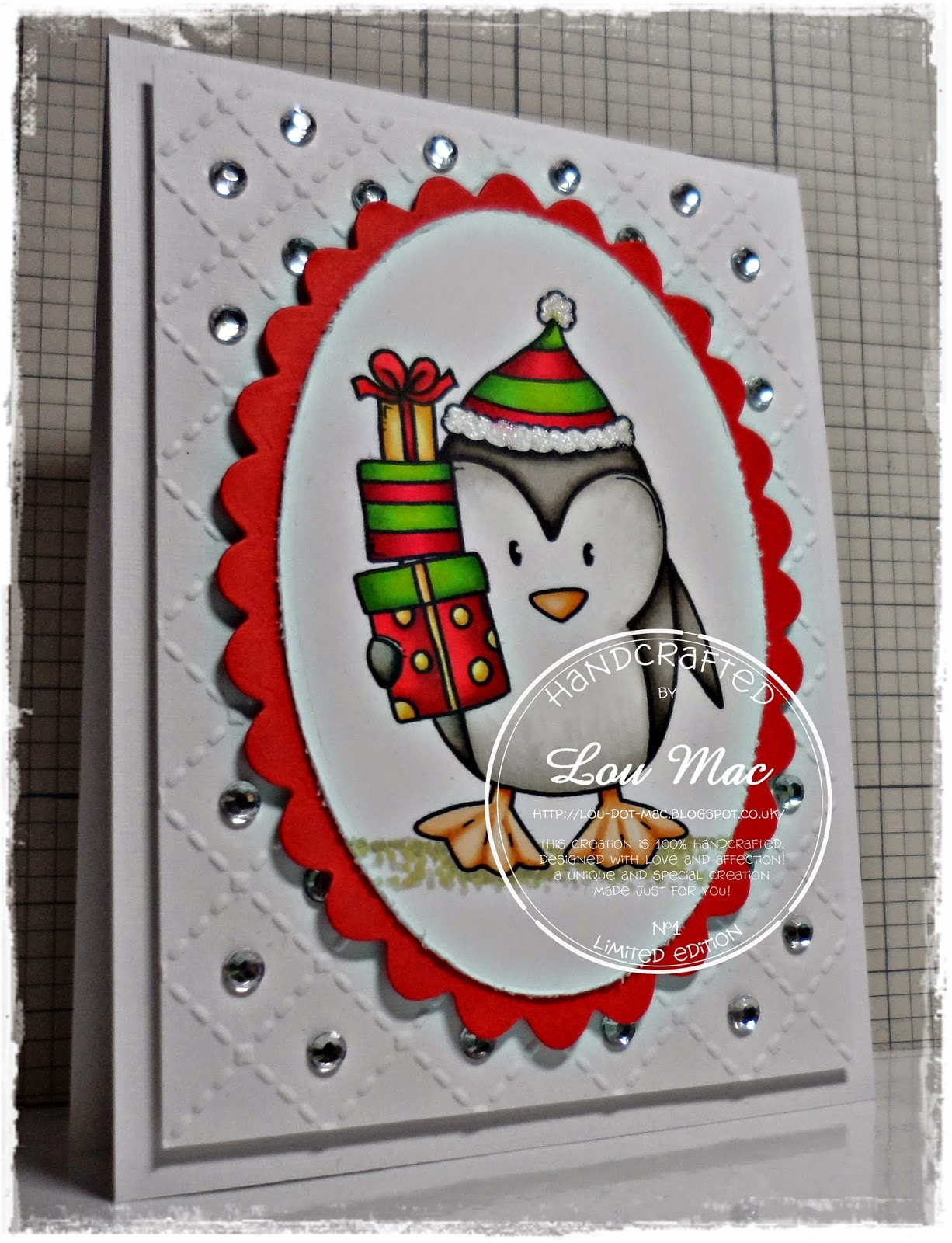 This is a pretty CAS card for me! No patterned paper, no ribbon. Just a bunch of die cutting, embossing and tonnes of gems. Love him.

I'm on a bit of a downer today, as I'm back at work tomorrow. Not only that, but we have stock take too! Nightmare! Haah. xx

I'm popping in to share an anniversary card I created last year. This was a very special request from a lovely regular of mine. She always gives me loads of details to work with and this time it was something along the lines of, wheat stalks, deers and nature. Here's what I came up with. 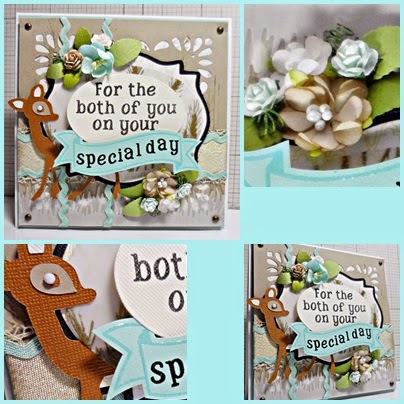 Yip, that's right. I even used up some of my beloved Petal Lu flowers. I added a bunch of flowers and 'foliage' in the form of die cut leaves. I cut the little deer using my silhouette and stamped some wheat stalks (which admittedly are difficult to see in the photo) onto the kraft background and the vellum piece behind the top oval. 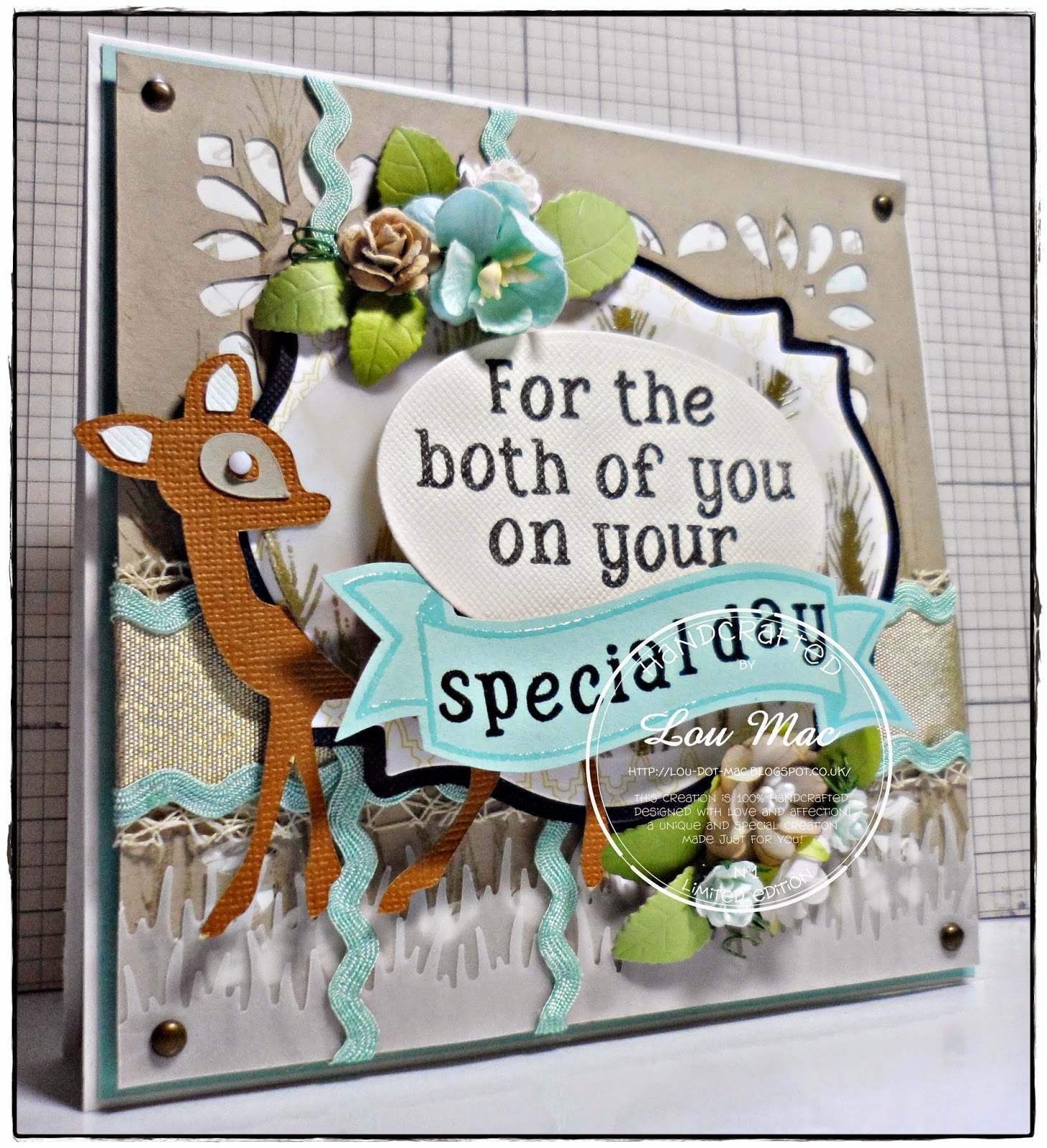 I kept the focus on the sentiment by stamping it in rich black and adding a black matt around the panel, but there are still loads of little details to draw your eye around the piece.

I hope everyone who had something to do with this card really enjoyed it, I know I had a blast making it! :) xx

No comments:
Email ThisBlogThis!Share to TwitterShare to FacebookShare to Pinterest

Posted by Lou Mac at 08:00 Labels: Digi, Liquid Pearls, LMMS, ProMarkers/ FlexMarkers, The Ribbon Girl
I'm not even kidding, this is my very first post of 2015. On the 15th of the month. What a disgrace! LOL! I hope to catch up very soon, as I have a bunch of cards from the end of last year to share as well as upcoming DT work for the rest of the month. We'll see how I get on!

Today I am sharing a card I created as part of Little Miss Muffet GDT for the month of January. I'll own up now, I totally missed the first week, I forgot to type up my post for last week, and now.. here we have arrived! LOL!!

I really wanted to kick off the year with some male cards. They are definitely something I enjoy making, but something my card pile tells you I don't make enough of.

Here's Polka Dot Pals Tenn with those awesome braces he's rocking. I coloured him using ProMarkers and had another go at flicky hair using my FlexMarkers. I'm getting better, I think. I won't give up! ;) 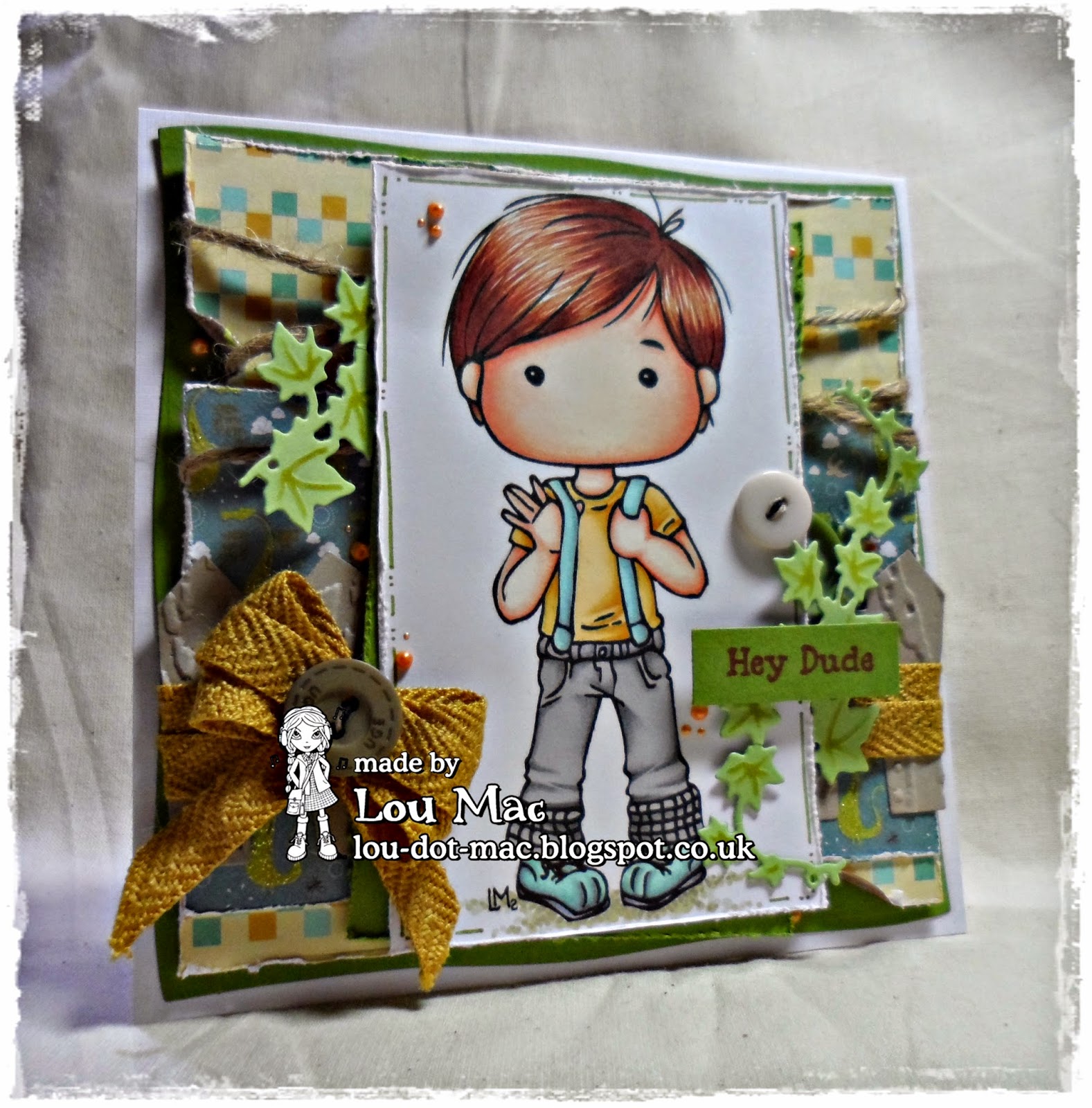 I coloured him up to match some very cute papers I picked up at The Works a couple weeks ago. Apparently they're going into liquidation, which is sad - I have only just discovered they have a crafty section. Although, that probably isn't a bad thing. I need to start using stash not buying more.

Anywho. I added a bunch of layers which I roughed up with an edger tool, lots of dimension and bits and pieces of die cuts, ribbon and twine. I added a stamped sentiment as well as a couple buttons here and there before adhering it all to the card base.

I hope you likey.

Thanks for stopping by today! xo

One of the reasons I haven't been blogging much is (as silly as it sounds) it's hard to type. During the winter I suffer really badly from keens (Google it, they're awful). It's like having a super super deep paper cut that never ever heals on the end of your finger. I have them on at least 4 fingers at a time. Enough whining, but yes, that's why. It hurts to type up blog posts. I'll troop on though. I've had a few messages about where I've disappeared to! ;)
4 comments:
Email ThisBlogThis!Share to TwitterShare to FacebookShare to Pinterest

All content including text and photos are © Louise McConnachie. I hope you are inspired while visiting my blog, and please feel free to case my ideas. But be nice, don't steal, I ask that you do not copy anything for publication, contest submission or selling purposes. Thank you.